Many people fail to distinguish the differences between weightlifting and powerlifting. However, these two barbell-centric forms of lifting have foundational differences in training priorities and performed exercises.

Powerlifting refers to heavy compound exercises such as squats and deadlifts, which are tests for strength and raw power, while weightlifting or Olympic lifting refers to compound exercises such as snatches and clean and jerks, which emphasize speed and technique. The foundational differences between powerlifting and weightlifting also translate to a difference in equipment used during training and competition, particularly the lifting belt.

Weightlifting belts have tapered fronts that promote greater flexibility and mobility when performing snatches and clean and jerks while still producing intra-abdominal pressure to aid the back padding. This cushions in effect, cushions the spine against the quick upper body movements associated with these lifts. Powerlifting belts, on the other hand, have an even width which creates greater intra-abdominal pressure and provides torso rigidity to support the back when performing powerlifting movements like squats, deadlifts, and overhead presses.

This article will explain the foundational differences between weightlifting and powerlifting that inspired the material and construction of their respective lifting belts. It will also explain the process of creating intra-abdominal pressure using lifting belts as well as the process of how they provide back protection to the lifter.

The Differences Between Power-lifting and Weightlifting

Flexibility and Mobility vs Strength and Power

The durable leather material used in powerlifting belts increases the spinal rigidity and offers better control of the pelvic muscles when performing squats or deadlifts. It also allows the lifter to lift 600+ pounds of free weights without any risk of ripping or stretching. Some powerlifting belt manufacturers use top-grain leather, or the top part of the animal hide, which provides additional durability. Weightlifting belts, on the other hand, use lighter materials that provide greater upper body movement to perform weightlifting exercises with great flexibility and range of motion. 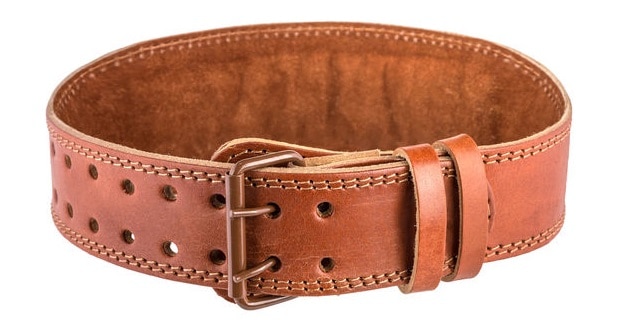 These two types of lifting belts also vary in the materials used to lock the belt in place. Powerlifting belts use prongs and levers to provide intra-abdominal pressure. Single prongs work similarly to ordinary belts and provide similar functionality and stability as double prongs. Levers, moreover, contain a locking mechanism to fix the belt in place quickly. These two locking mechanisms ensure that the belt locks in place and can withstand immense pressure when powerlifting.

Weightlifting belts, on the other hand, often come with Velcro straps to lock the belt in place instead of prongs and levers. Still, there are also weightlifting belt variants that use prongs. Unlike prongs, Velcro straps allow weightlifters to determine and minutely adjust the tightness of the belt accurately to provide sufficient intra-abdominal pressure but also allow fluidity of movement to avoid any technical errors in the lift. 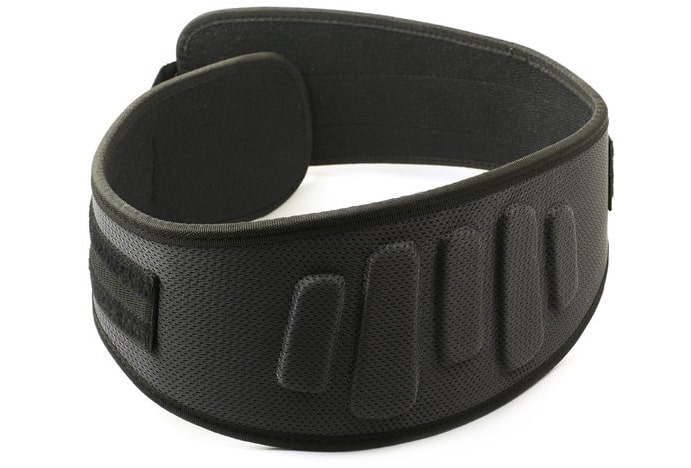 Most weightlifters wear the belt between the rib cage and hip bone, but these placements can vary depending on the lifter’s preference and the type of exercise that they will perform. Many lifters doing squats tend to place the belt at the top of the iliac crest of the hip bone to support the lower back fully while those doing deadlifts prefer to place it along the stomach. The general rule, however, is to find the best location where the belt does not hinder in performing the full extent of the exercise while still providing intra-abdominal pressure.

Powerlifting belts typically measure 4-inches wide and have a thickness of around 10-13mm. Weightlifting belts often have a similar 4-inch width but taper to around 2-2.5 inches at the front. The measurement of powerlifting and weightlifting belts differ because of the necessary “blocking” which ensures that the spine remains in an optimal position when lifting heavy weights. This “blocking” refers to intra-abdominal pressure or the 360-degree pressure around the abdomen. This ensures that the thoracic and lumbar spine remains in a neutral position.

Weightlifting belts, on the other hand, offer back padding as additional support but also allow the lifter to perform the lift with a full range of motion. The tapered front in weightlifting belts ensures that the lifter benefits from the back protection and intra-abdominal pressure but also enables fluidity of movement.

Powerlifting belts provide complementary protection for the lumbar spine by pushing the abdominal wall against the belt to create intra-abdominal pressure. This feature is essential for powerlifters because it provides substantial back support especially at the bottom part of deadlifts or squats. This also keeps the torso rigid throughout the movement and helps to prevent injury.

Weightlifting belts also provide similar back support as powerlifting belts, however they focus more on cushioning the back against the sudden movements associated with snatches or clean and jerks. Weightlifting belts do not provide as much torso rigidity. They provide a safe space for the back muscles to land during the lift.

Heavy reliance on lifting belts, however, can affect overall fitness, especially back and abdominal strength. The best back protection is still enhancing the strength and endurance of the core muscles and the back muscles to support the spine during lifts.

Lifting belts only serve to enhance the protection of the spine during heavy lifts, but both weightlifters and powerlifters need strong core and back muscles to perform their respective lifts safely and successfully. It’s best to train without a lifting belt to help promote motor learning for the back and abdominal muscles. You should reserve the use of a belt for when you’re lifting at 80% your one-rep max.

Powerlifting and weightlifting belts cater to different sets of lifting exercises with different foundational principles. They are equally effective belts in their respective domains and provide sufficient back protection for the lifter.

For common gym workouts and exercises that involve squats, deadlifts, and overhead presses, powerlifting belts are better than weightlifting belts in providing additional back protection and intra-abdominal pressure.

BCAA vs EAA: Which Should You Take?